It was this time of year (and this approximate date) that Shakespeare married Anne Hathaway. 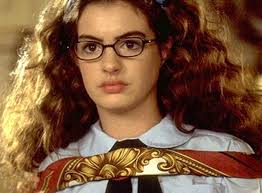 Not this one, obviously. There aren’t any verified pictures of Shakespeare’s Anne…

Like everything else connected to Shakespeare, the documentary records are incomplete and a somewhat hazy, and a number of myths and legends have built up around the known events. It’s almost as good as a play! END_OF_DOCUMENT_TOKEN_TO_BE_REPLACED

A new (well, not new exactly…) copy of the First Folio has been found in France! The full story is here. I must admit I was surprised at the number of copies still in existence – and intrigued at the thought of using the marginalia to stage a performance of Henry IV…

I went to see the Play that Goes Wrong last night, which was brilliant, but got me to thinking about how much it owed to the long tradition of theatre. So much of its humour relies upon its audience knowing what should happen, so that we would find it funny when things didn’t go as expected.

And this is a completely different situation from the one in which Shakespeare found himself. Although there had been some tradition of dramatics (the Mystery Plays were certainly around in the 1300s), the first theatre was only built in London in 1576 – less than 20 years before Shakespeare started writing. His work was basically cutting-edge.

And how different the world would have been, if Shakespeare had been born a hundred years earlier, or a hundred years later. Would there have been someone else to carve out his place as the national poet “not of an age, but for all time”?

If you know me, you’ll know I like to knit*. Knitting is awesome – you can make something three-dimensional, shaped, and stretchy in two perpendicular planes using just yarn and some sticks. It’s been around for ages, developing from Roman/Egyptian techniques for making socks, and because it is relatively straightforward to learn (and requires little in the way of equipment) it was a popular activity. All of which meant that by Shakespeare’s time, the activity – and the language- were already in common usage.

END_OF_DOCUMENT_TOKEN_TO_BE_REPLACED

I’m going to go on a slight diversionary tour here, and talk about Shakespeare’s sonnets. Everyone can quote them – at least a little bit – and (I think) everyone has a favourite. My own is Number 130*.

END_OF_DOCUMENT_TOKEN_TO_BE_REPLACED

Since my local display is currently prevent me from catching up with Doctor Who*, I thought you might like to know that Shakespeare only mentions fireworks twice in his entire oeuvre – once in Henry VIII “those remnants of fool and feather that they got in France with all their honourable points of ignorance pertaining thereunto- as fights and fireworks” and once in Love’s Labours Lost “the King would have me present the Princess, sweet chuck, with some delightful ostentation, or show, or pageant, or antic, or firework”.

There’s a touching glance to the power of fireworks in Romeo and Juliet “These violent delights have violent ends and in their triumph die, like fire and powder, which, as they kiss, consume.”

This is perhaps a surprising omission given fireworks had been around for at least 100 years (they were definitely used at the wedding of Henry VII and Elizabeth of York), and that Elizabeth I apparently created the position of “Fire Master of England.” Not to mention that the Gunpowder Plot actually happened while Shakespeare was still living in London!

I got an email today saying that unfortunately due to an accident the Lazarus Theatre Company has had to cancel its production of Henry V. I hope they manage to put it on at some point in the future!

I spotted a couple of Shakespeare-related things today. The first is exciting – the Maxine Peake production of Hamlet has apparently been filmed and will be released to cinemas in 2015 (see here for the full story). The fact that they filmed it after the show had finished probably just means they didn’t think of it earlier, but could mean a bit more originality in the direction/editing than they can normally manage with a filmed production.

The second is amusing – apparently there is a theory that Elizabeth I actually wrote Shakespeare’s plays. I am not generally a fan of authorship conspiracies (not least because so many seem to carry an undercurrent of snobbery – “Shakespeare couldn’t possibly have written the plays himself because he was relatively poor. This nobleman must have done it instead.”) But this one has tickled my funny-bone and I think someone (possibly me) should get on with turning it into a cracking novel… 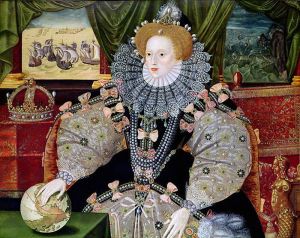 Maybe the globe is a subtle reference to the playhouse, and not the international might of England after all…

The Globe has just set up its own TV player, from which you can rent or own productions of pretty much every Shakespeare play (I make it 35 out of 38,I think the three missing ones are those not in the First Folio, but I admit I haven’t double-checked*). Check it out here. I think the idiosyncratic choice of languages is down to their 2012 programming (as part of the Cultural Olympiad they produced every Shakespeare play, but using theatre companies from around the world), and the relative newness of producing digital versions, rather than reflecting a conscious decision. It’s good to know that I can watch Cymbeline, even if it is in Juba Arabic.

In terms of older productions, they have the Eve Best/Charles Edwards Much Ado About Nothing, which I really enjoyed live (it makes you realise how wasted he was in Downton Abbey), and Doctor Faustus starring Arthur Darvill, which may not be Shakespeare but I think will be well worth a look**. There go my plans for the weekend!

*I’m pretty certain – this is the professional scepticism kicking in.